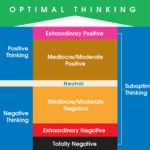 Why would a federal judge order a test on the cement Halliburton Co. used to seal the BP well that blew out catastrophically in the Gulf of Mexico on April 20, 2010. Because the judge understands that when the cost of failure is high, optimism is the wrong strategy!

I often wonder why talented executives continue to employ the “If it ain’t broke, don’t fix it” and “Think Positive!” mottos in such high risk situations. What’s the payoff? And why is it still fashionable to degrade negative thinking? Negative thinking is valuable when it cautions us against danger. It’s necessary in any design process to point out the flaws so that they can be rectified.

Rather than judge, suppress, avoid or dwell on negativity, Optimal Thinking executive coachees employ negativity as an optimization signal. They accept negativity, seek to understand it, and then make the most constructive use of the information.

During Optimal Thinking executive coaching for catastrophic situations, executives define their vulnerabilities and high risk situations and develop optimal contingency plans to protect against worst event scenarios. They gain a profound understanding of the subtle advantages and disadvantages of positive and negative thinking, and use Optimal Thinking to create best practices and their best solutions. They consciously choose the best, and put issues to rest.

During each executive coaching session, the executive functions in the realm of the highest and best. In time, the executive employs Optimal Thinking instinctively, and is adept at maximizing every situation.