Why Optimal Thinking is Imperative in Executive Coaching 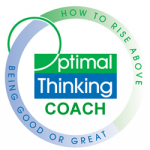 Executive coaching provided by suboptimal thinking coaches does not achieve best practices or best solutions. When the thinking patterns behind the executive’s suboptimal behaviors remain intact, executives fail to meet deadlines, compromise team building, endure unnecessary conflict, use passive-aggression as a management tool, lack organizational commitment, or even control others with tantrums. In other words, their best selves are not in charge of their career.

6 Responses to “Why Optimal Thinking is Imperative in Executive Coaching”

We serve cookies on our site to analyze traffic, understand your preferences, and optimize your experience. Ok. ThanksMore Info