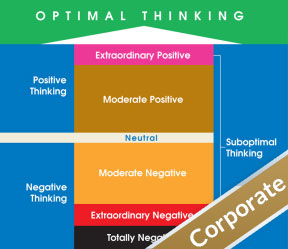 Tim Cook, CEO of Apple Inc. is revered among the greatest CEOs in the world today. On January 3, 2022, Apple became the first U.S. company to reach $3 trillion in market value.  Apple was also the first company to achieve a $2 trillion valuation. Cook brought the 5G iPhone, Apple Watch, AirPods Max, iHome and more to the market.

How Tim Cook thinks was evident when he spoke to the media about succeeding Apple founder, Steve Jobs. He shared his commitment to the Optimal Thinking philosophy “I do my best, regardless of the circumstances” when he stated:

“I have never tried to fill his shoes, not on day one and not in year 10. Because I’ve always thought they were not fillable by anyone, for one thing. Secondly, I think all of us, the challenge we all have is to be the best version of ourselves, and to keep pushing the boundaries of what the best version of yourself is. And so that’s what I’ve done.”

On September 2, 2019, Cook demonstrated Optimal Thinking when he tweeted:

Our country is strongest when everyone has the opportunity to succeed.

On August 2, 2018, Apple became the first public U.S. company to reach a 1 trillion valuation. Cook stated that the market capitalization is “not the most important measure of the company’s success.”

Financial returns are simply the result of Apple’s innovation, putting our products and customers first, and always staying true to our values.

This is a tiny window into how Tim Cook thinks. He supports racial justice, and climate change. He also advocates the fundamental right to privacy in technology.  Some years ago, I analyzed the thinking Cook displayed during Apple’s 2013, 2014, and 2015 first quarter conference calls when he responded to probing analysts.

To anyone who follows Apple’s performance under Cook’s leadership, the results were not surprising.

Extraordinary positive thinkers like to resolve challenges, especially when others believe that the problem can’t be solved. They love to figure out how to make the impossible work. Their high energy and enthusiasm enables them to sell ideas, products, and services. Because they are creative, flexible, and welcome change, they find unconventional ways to help teams perform exceptionally well.

Extraordinary positive thinkers are motivated by being more than ordinary, remarkable, and outstanding. They thrive on making a difference.

Although people react differently to situations, extraordinary positive thinkers often feel upset if they are ignored when they expect recognition for their efforts. They will also become upset if their performance is mediocre. They do not like their freedom being restricted by traditional options. When forced to conform, they can feel trapped. They do not like rigidity, strict rules and guidelines, or having to observe traditions.

Optimal Thinking is the mental basis of individual and corporate peak performance. This realistic thinking style enables us to maximize any decision, process, communication, and situation.

Cook uses Optimal Thinking to define his commitment to quality.

As I’ve said before, our objective has always been to make the best, not the most. And we feel we’re doing that.

we’ve been selling with China Mobile now for about a week, and last week was the best week for activations we’ve ever had in China.

We have zero issue coming up with things we want to do that we think we can disrupt in a major way. The challenge is always to focus to the very few that deserve all of our energy. And we’ve always done that, and we’re continuing to do that.

Want to Put Optimal Thinking to the Test?

Are you a CEO, senior executive or rising star who is facing a tough challenge? Optimal Thinking Executive Coaching will give you the best chance of achieving immediate victory and ongoing success.  With Optimal thinking, you will experience peak performance while dealing with any challenge.

Read my analysis of “How Elon Musk Thinks” (Tesla CEO and Product Architect). These posts are part of the “How CEO’s Think™” Optimal Thinking article series.

Feel free to nominate a well-known leader for a thinking analysis in the comments below.

10 Responses to “How Tim Cook Thinks”

Faced with tough hybrid, remote or on-site workplace challenges? Ready to optimize your leadership and performance?

Help Me To Optimize Performance